Finally! After waiting half a year since its initial announcement, the native Shopify connector for Business Central (BC) was released on the 26th of May. Read Mike Morton’s blog, (general manager at Microsoft) about the new release.

When Microsoft announced this product in October 2021 at Directions EMEA in Milan, the plan was to deliver the Shopify native connector on the market in January 2022. At that time, everyone in the business thought Microsoft worked together with Shopify to develop a brand new integration for Microsoft Dynamics 365 Business Central. It was a big surprise for us when the news came out that Microsoft had acquired an existing solution, coming from the Belgian ISV company Scapta. At that time, Scapta had been providing their own “Scaptify” connector to their customers for several years already.

As you might know, the new Shopify integration solution brings competition to our existing solutions. Our core business since 2012 has been “e-commerce connectors”. Starting with integrations only for Magento and Microsoft Dynamics NAV (nowadays Business Central). Since 2018 we’ve expanded our product portfolio with standardized integrations for Shopify, WooCommerce, MplusKASSA, CloudSuite, Shopware and ChannelEngine.

Based on the 350+ previous projects we’ve delivered, we have extensive knowledge of best practices, insights into requirements and an understanding of the complexity of integrations. Besides that, we know which typical risks exist during a project. We have embedded all this experience into our software solutions to give our customers the best integration experience possible.

In this blog, we will objectively review the ‘new’ native Shopify connector as much as possible.

This blog is based on the following resources

The approach for our analysis can be found below

Embedded functionality in the Shopify connector

From this list of capabilities, we’ve added multiple remarks in relation to our own Shopify integration solution: The Tinx Shopify connector

Support for more than one Shopify shop

Bi-directional synchronization of items or products

Note of Tinx: it is impossible to use a formula to calculate the stock. Almost all of our customers use a formula, like for instance: Inventory minus Qty. on Sales Orders

Import of orders from Shopify

Note of Tinx: it is impossible to assign specific number series to the orders in the different sales channels

Note of Tinx: we could not find anything in the setup to send sales shipments with tracking info to Shopify

The online help documentation is extensive and complete (yes, we know we can learn from this 😊). Click here for the manual

Many of our customers are starting with a new Business Central environment while already owning an existing webshop like Shopify. In such an example, they want to bring in data into BC from their Shopify environment. We’ve tested these scenarios to see what’s possible.

We have created five items in Shopify. These five items are active and have enough inventory. One item contains an option with four variants.

We have enabled the parameter ‘Create new items’ in the webshop setup. When we press the synchronization ribbon, data is downloaded in table Shpfy Product (30127), but only the last item is automatically created in BC: 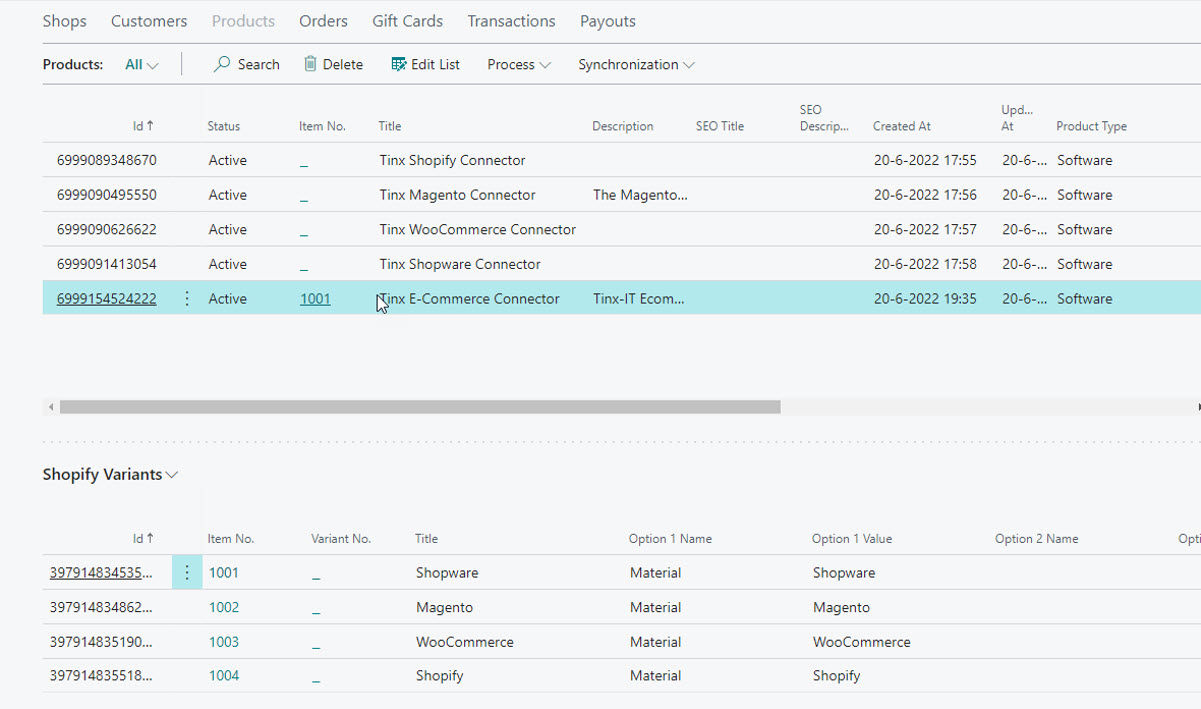 If we check the created items in BC, the following stands out:

If we press ‘Sync Product Images,’ we can wait all we want, but nothing happens. The system is doing something, but no images appear on the Item page. Also, no visible error explains the lack of downloaded images.

Downloading registered customers into BC

In the Shop card, we have enabled the field ‘Auto Create Unknown Customers.’ With this setting turned on, we expect newly downloaded customers from Shopify to get their own new and unique customer card in BC.

We’ve created one customer in Shopify. 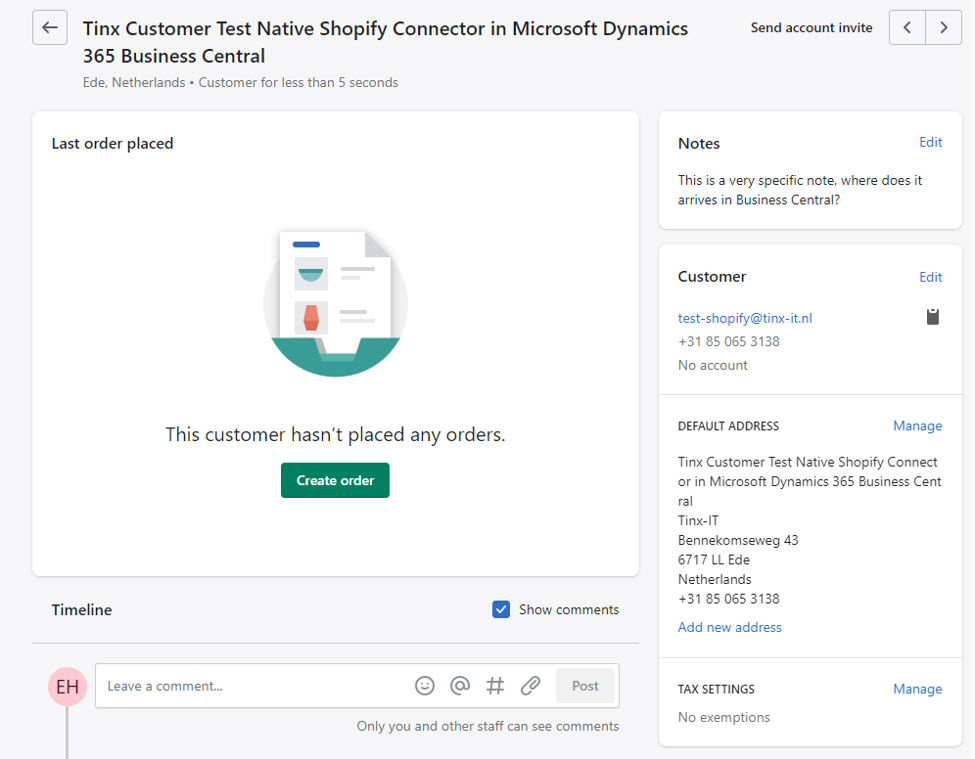 We’ve activated ‘Start Customer Sync’ on the Customer page.
The result is as follows: data is downloaded into the table, but the BC Customer No. stays empty, so no Customer Card is created. We are not able to create the customer card in any other way. There is no option available.

Also, we have noticed that the Shopify tags are empty in the fact box: 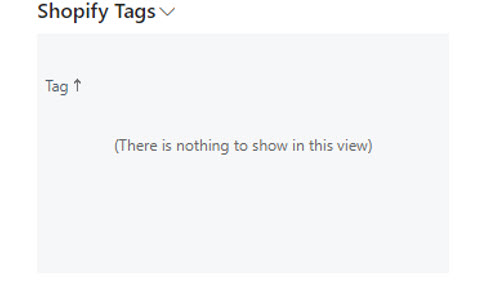 Import one order into BC

We have created one order in Shopify:

If we want to download the order into BC, we have to fill in the page below. 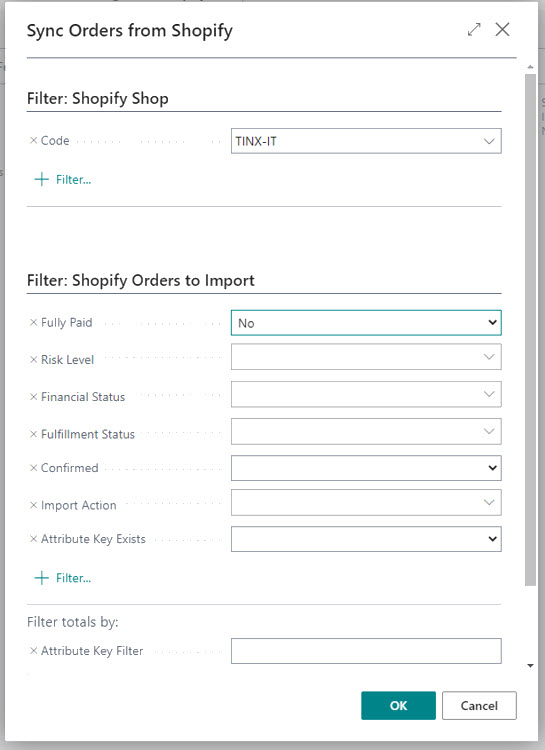 After that, we get the error message below. It seems like the weborder isn’t created at all in BC. The solution offers no meaningful log information or troubleshoot functionality to find and fix the problem. In general, it feels like a black box.

We have multiple prospects who are in search of an alternative to the Scaptify solution. Reported reasons to choose another vendor:

An interesting comment on the Microsoft cloud blog seems to support these strange issues.

Services offered for the Shopify Connector

What do Shopify merchants need when they want to implement the native Shopify Connector in Business Central? For a while, we have been offering two consultancy services in Microsoft AppSource for our Tinx integration solution:

The free consultation is meant for customers who have downloaded our app from Microsoft. We are helping them with a quick start to show them the possibilities and convince them this is the right solution.

If we check Microsoft AppSource, we see Scapta has added many services around their Shopify connector implementation since Microsoft acquired the solution.

They are offering a series of different sessions:

The numbers are quite steep, with an hourly rate of almost 300 dollars (285 EUR). This is a lot more than, for instance, the Tinx rate (around 162 dollars). So, even though the native Shopify connector itself is free (in comparison, we are handling a monthly subscription fee), the services around the implementation are much higher than what an average ISV charges.

New customers should consider this: what will be the ROI in the end?

Credit where credit is due. The installation procedure is fast, you only have to install the Business Central app in Shopify, enter the webshop URL in BC, and the integration is there!

However, looking at all the Shopify projects we have done over the last years with the Tinx connector, it wouldn’t have been possible to perform them to spec with the native Shopify app. As experts in the field, the solution isn’t mature enough for us. We think it is only suitable for very straightforward business cases with simple requirements. As soon as a customer has more complex requirements and different workflows, the solution will not fit.

If you would like to learn more about choosing the right ERP e-commerce connector for your business, consider reading the following blog as well.

This website uses cookies so that we can provide you with the best user experience possible. Cookie information is stored in your browser and performs functions such as recognising you when you return to our website and helping our team to understand which sections of the website you find most interesting and useful.

Strictly Necessary Cookie should be enabled at all times so that we can save your preferences for cookie settings.

If you disable this cookie, we will not be able to save your preferences. This means that every time you visit this website you will need to enable or disable cookies again.