You can read the article by clicking here.

At this moment Shopify is one of the fastest growing and developing cloud E-commerce platforms. It has steadily grown into a formidable competitor to Magento, WooCommerce, and Shopware.

You can read more about the market share of Shopify compared to other platforms on this website.

Is Microsoft going to compete with its independent software vendor (ISV) partners?

You can read the full discussion by clicking here.

Questions from this discussion on LinkedIn:
– Why is Microsoft competing with its ISVs?
– Does Microsoft look at AppSource, to figure out what apps are doing well, to copy that functionality into their apps for BC?
– Why would ISVs invest a lot of time and money into these apps, if Microsoft builds its own version, making theirs obsolete?

At the time of Microsoft’s announcement, there were literally dozens of apps in Microsoft AppSource. As you can see below. 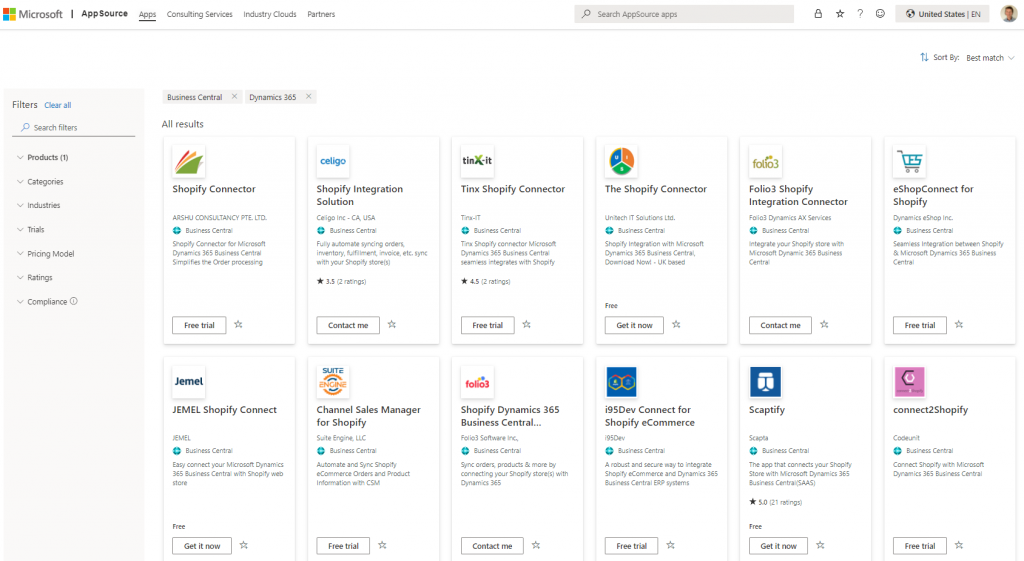 Directions EMEA 2021 took place in Milan between October 27 and 29. At this annual event, all Microsoft BC partners came together to network, gather information, attend Microsoft keynotes and content sessions, and visit the ISV (sponsorship) market. During Directions EMEA 2021, Microsoft’s Mike Morton made a big announcement about their new partnership with Shopify. This new partnership with Shopify was shared with the attendees during two of the three keynotes. 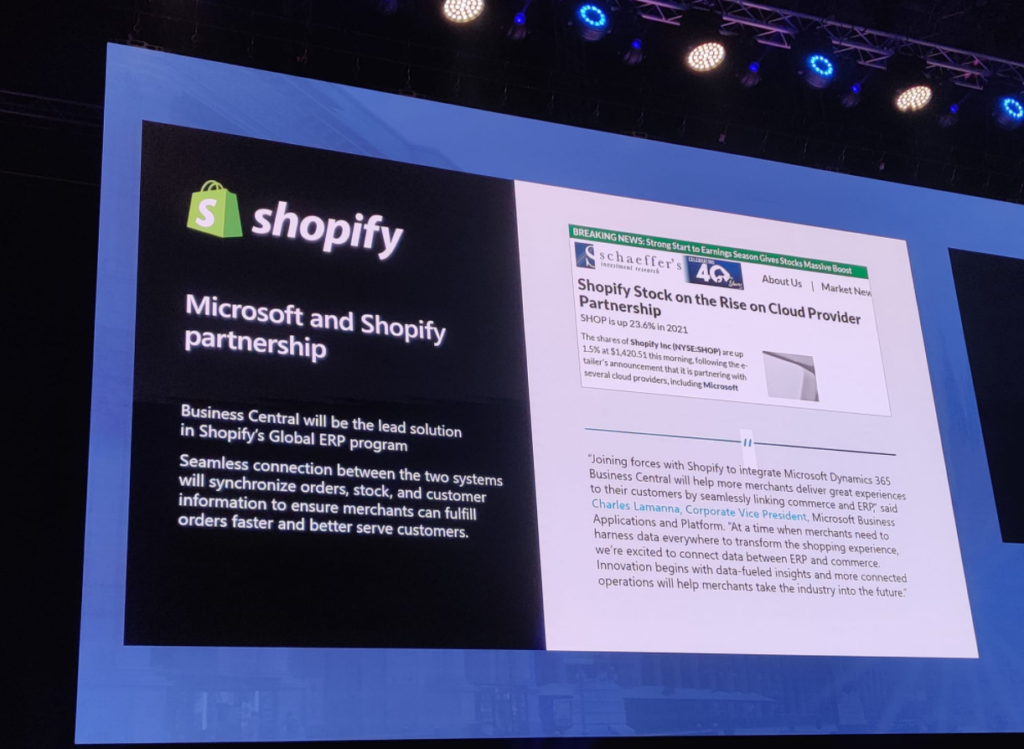 At that moment, Shopify had just released their “Global ERP program”, starting collaborations with major ERP players such as Microsoft, Infor, Netsuite, BrigthPearl, and others.

Using this program, merchants would gain access to certified Shopify apps, without the need for third party apps to link their ERP platform with Shopify. Microsoft would receive support from the Shopify Partner Engineering team to build their new connector apps. This would assure merchants that the app will meet high standards as well as the best user experience.

What does this mean for Tinx-IT?

In the summer of 2019, the connector for BC was added as well, and we’ve launched a Microsoft AppSource edition too. Since then, we have implemented dozens of connectors for customers worldwide that wanted to connect their ERP platform with Shopify.

Microsoft’s native Shopify connector is estimated to be available starting April 2022. The preview for ISVs will be available in March 2022. This connector will be part of standard BC.
More information about the Microsoft roadmap can be found here.

We are particularly interested in the following two questions:
– What will the architecture of Microsoft’s own solution look like?
– How flexible and adaptable will the mappings between both systems be?

1. The architecture of the Microsoft solution

Will it basically be a middleware application in Shopify, that communicates with BC? Or will the connector be an integral part of BC and is communication initiated from BC? Given the information that Shopify provides, we believe that the actual functionality will be put into an app in Shopify (specifically their high-end “Plus” edition) that communicates with BC. This however raises the question: will the connector also be made available for more common and affordable versions of Shopify? Or will Shopify only focus on Shopify Plus’s higher market segment, therefore excluding the majority of their customer base?

2. Flexibility and adaptability of the mapping

According to Microsoft, the following functionality will be part of the native Shopify connector:

What stands out here is that the exchange of product information, such as SKU, descriptions, prices, etc., is not mentioned as an integration point. Ordering a product is the basis of a webshop. If this, therefore, means that products must be manually transferred from BC into Shopify, this suggests a severely limited solution. There is also nothing mentioned about setting up configurable products. So, does that mean that you simply cannot use variants? Are metafields supported? Because our customers use them frequently to share BC product data with Shopify.

Concerning the three functionalities mentioned by Microsoft (stock, orders and customer information), we’ll shed some light on what merchants can pay attention to, to check whether the new native Shopify connector will be useful for their business case. The most interesting question in general is: how flexible and adaptable will the connection be? We know for a fact that on our end, the Tinx Shopify connector is very flexible and adaptable since we use a user interface that houses mappings that can be configured by end-users (our customers), partners or ourselves.

2.1 Inventory / stock: how do you properly calculate quantities?
Will inventory always be determined through one field in BC? Or can formulas be set up in such a way that, for example, the actually available inventory is sent to Shopify instead? Will it be possible to excluded certain locations when determining your available inventory? Will there be a possibility to limit certain locations? In other words, can location filters be used for inventory calculation?

2.2 Orders
Likely the most important flow with a webshop integration is importing web orders into BC. In general, a customer can place an order on a webshop in two ways:
– Using a guest account (no registered account) -> information only available in the order;
– Using a registered account -> the customer can log in and follow the status of the order at all times in their own Shopify account

Will both types of order flow be flexible to configure? How will BC determine which customer number is required during the download of a guest order? Will merchants be able to determine the number series for their Shopify orders in BC?

2.3 Customer Information
How will the native Shopify connector handle the customer information flows? Will it for instance be bidirectional, meaning that customer accounts can be created and updated within BC as within Shopify? Whilst Shopify mainly focuses on the B2C market, many B2B webshops require this bidirectional functionality.

If the information is only sent one way, that means newly registered customer accounts are imported into BC. Will merchants be able to decide whether these customers are converted into the entities “customer” and “contact” in BC? Can customer templates be used, allowing you to automatically populate certain fields like posting groups? Can you match for pre-existing email addresses to match with your import in order to avoid duplications? In other words, if a customer already exists in BC, will a Shopify account with the same email address automatically be matched in BC?

It will not surprise you that the answer to the above questions with the Tinx Shopify connector is a resounding yes.

You can find the Shopify connector in Microsoft AppSource by clicking here.

The future of Shopify Business Central and Tinx-IT

We have to admit that we’re keen on finding out what Microsoft’s competitor will offer out of the box. However, we’re also more than confident when it comes to the quality and scalability of our own Shopify connector We’ve been working with this technology since 2008 and we have vast experience in linking webshop platforms with Business Central. This gives us an important edge in the market. Tinx has years of experience in linking various E-commerce platforms, one of which is Shopify (with all of its editions).

We will keep you posted!

This website uses cookies so that we can provide you with the best user experience possible. Cookie information is stored in your browser and performs functions such as recognising you when you return to our website and helping our team to understand which sections of the website you find most interesting and useful.

Strictly Necessary Cookie should be enabled at all times so that we can save your preferences for cookie settings.

If you disable this cookie, we will not be able to save your preferences. This means that every time you visit this website you will need to enable or disable cookies again.